Tourists of the world! Do you still send postcards?

If so – and you’re visiting Britain – make sure you’re putting them in an actual post box.

The difference between your friends and family receiving your news and a scenic picture of our country depends on one vowel and some cultural knowledge.

Yes, that’s right, a colleague of mine in Bristol noticed a Japanese tourist dropping a whole bunch of freshly written postcards into a litter (rubbish) bin.

He was too far away to run and stop them and what’s worse, it’s a regular occurrence.

Bristol city council have black litter bins with gold lettering spelling out the word ‘litter’ and then the name and logo of the council. And in a world where everything looks alien to you, it’s a seemingly easy mistake to make.

He’ll never know the reason why his postcards didn’t arrive.

Silly errors have ramifications and these kind of mistakes are happening all the time in business too.

A misspelt word here or there could mean the difference between a potential customer finding you on the internet. Or not.

It could reflect poorly on your reputation for taking care of the finer details.

It could mean the difference between securing a contract or losing the business. And you may never know why.

If you’re doing your own translations, please get a second person to check over your work. Ideally a native speaker who can add a bit of cultural insight if needed. A little extra effort can make a huge difference.

Don’t do the business equivalent of putting your postcards in the rubbish bin. 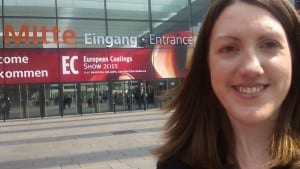 Earlier this year I attended the European Coatings Show in Nuremberg and was amazed at the number of sales professionals I met who were doing their own translations. (Warning, this is heading into rant territory!) Okay, so I wasn’t surprised that the English translations were being written by non-native speakers – that I could tell and was often the reason for talking to them in the first place – but that the very people who were in charge of bringing in new business, selling the companies’ products and services were also spending their time translating.

Sales professionals who speak a foreign language are most definitely a boon. I’ve had the pleasure of working with many multi-lingual business development managers in my time and admired the way they could confidently do business across a wide variety of cultures and nationalities. But their English wasn’t flawless, sometimes the meaning needed clarification, and they liked to get important documents checked by a native speaker.

One company representative told me that although he didn’t see why they should hire a translator because he speaks and writes excellent English*, sometimes he doesn’t really want to translate. So in this particular company, you have someone hired for his skills selling products and bringing in business that is not bringing in any money because he is doing a job he doesn’t want to do!

And this is besides the fact that, as a rule, you should only translate into your native language. Translating out of your native language is always slower and will always need proofreading before publication to avoid damaging your reputation with errors.

So though you might believe you are saving costs by translating in-house, if you actually look at the time spent on these tasks and your colleagues’ skill sets, the answers might surprise you. In the worst-case scenario, your company is losing business in two ways: by spending valuable time translating instead of making sales, and by producing translations that show a lack of attention to detail and could be putting off potential clients.

Outsourcing this task to a professional translator gives you back the time to make more sales – more than covering the cost of outsourcing. The translation will be completed and proofread by a qualified linguist, and by someone who loves what they do! Not only does this guarantee the best result, you ensure that your excellent reputation remains intact.

*I’m taking his word for it because we were actually talking in German.